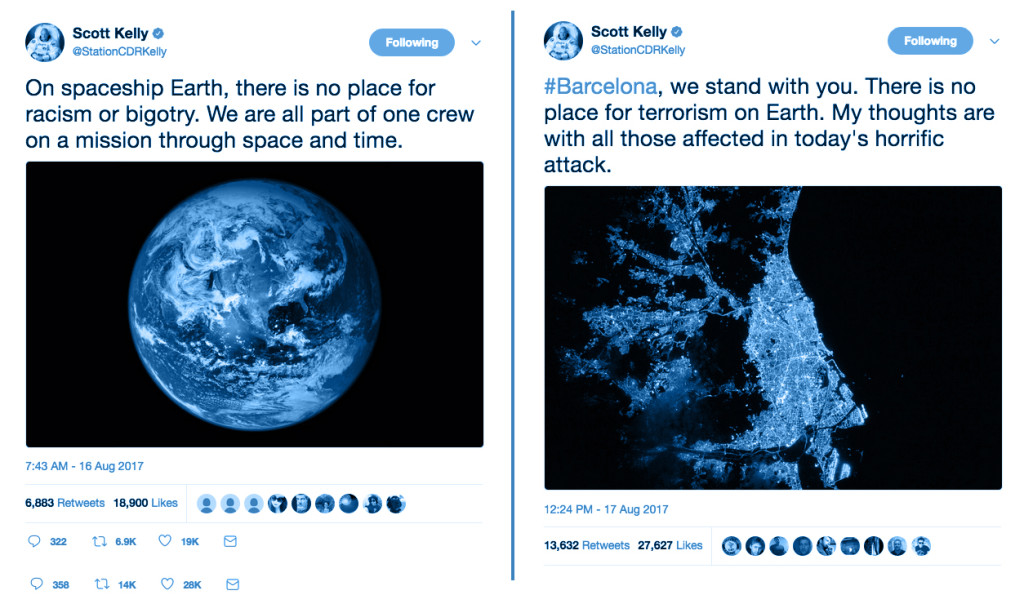 On 2017, August 16th, Scott Kelly, famous astronaut and author of the upcoming “Endurance. A Year In Space, A Lifetime On Discovery”, wrote on his Twitter account: “On spaceship Earth, there is no place for racism or bigotry. We are all part of one crew on a mission through space and time.” (Same thoughts I shared right here some weeks ago).

Probably you will remember Kelly as the man who spent almost one year living in the ISS (International Space Station). Yes, he is the guy that agreed (with his brother Mark) to be part of a unique experiment. Due to their special condition (they are not only twins, but also had had a similar career), NASA had the opportunity to conduct a complex study on how living in space affected human body.

Back to August, 16th: Scott Kelly twitted the quoted text, adding a snapshot of Earth, the perfect blue ball we have become familiar with. Being an American citizen, more explanations seem unnecessary: events in Charlottesville and their aftermath still are on everybody’s mind.

Kelly’s message was simple and clear: we are all the same because we live at the same place. And, more important, all of us belong to the same species. (Oh, yes, forget about old theories of different races, there is only one; the human race).

On day later. 2017 August, 17th, local time: a few minutes past 17:00 (UTC/GMT + 1 hour). Sadly, Scott Kelly has to post one more message. This time the text says: “#Barcelona, we stand with you. There is no place for terrorism on Earth. My thoughts are with all those affected in today’s horrific attack.”

Again, a photo taken from ISS accompanies the tweet. It shows Barcelona by night, just a bunch of flashing spots marking the main streets of the city. A beautiful snapshot from outer space.

The tweet is the reaction to the last terrorist attack (a van has run over the people that were walking the Ramblas, the most popular street in Barcelona, causing at least 13 killed and a hundred of wounded).

Before that, terrorists attacked other cities and other countries. Not only that, around the planet there are still a lot of silent wars going on. We live in a very imperfect world, but that doesn’t mean we don’t have dreams, or that good will doesn’t exist.

Scott Kelly is a good example. Everyone has to learn something from him. He has gone up there and, resting alone in the darkness, he has had enough time to think about a lot of serious business. Maybe all of us need to go there and see by ourselves that these photos are for real, that there are no borders, no frontiers, nothing that makes us different.

It doesn’t matter how much hate some people try to spread, or how hard they try to impose their ignorance upon the community: the truth is we all are human beings living in the same planet, and there are no borders other than the ones we want to set. And we truly don’t believe in them.