By Montecarlo On February 20, 2012 · 5 Comments · In STORYTELLING, TRANSMEDIA
Tweet

Every year, the International Film Festival Rotterdam (IFFR) becomes the meeting point of the edgy independent cinema around the World. And more.
Past January 30th, in the frame of CineMart, MEDIA Desk Netherlands and MEDIA Desk Belgium – Flemish Community organised a Transmedia session.
We talked about many things (see below) and although this post is only the summary of what was said, elaborated from many different notes taken by various of the participants, we think it will give you a taste of the day.

1.1.- PEOPLE
The meeting was conducted by hosts Dominique Van Ratingen (NL) and Natalie Goethals (BE), directors of the MEDIA Desk.
They started the session detailing the program and the procedure.

Aside the organisers, there were eighteen of us. In the list of names so you will see that our professional backgrounds and specialities and the different countries we come from make for a good portrait of both Europe and Transmedia, practitioners and institutions. 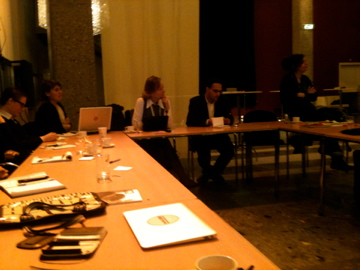 Some of the members of the group had met before, some were new acquaintances. So, for starters, the conductors proposed us to introduce ourselves to the group, It was a simple and effective way of helping people to break the ice and to feel comfortable with each other.

1.2.- TRANSMEDIA CLOUD
After that, they briefly explained the morning program, that would continue with another icebreaker.
We had to put down our answer to the question: “When thinking of the term Transmedia, what comes to your mind?” on sticky notes (one concept per note) and share it with the group by sticking our notes on a glass wall.

People freely arranged and rearranged the different ideas, in order to form groups by affinities. That (besides moving the participants from their seats to interact with each other) brought the first exchange of opinions in a clear visual way.
In a matter of minutes, an entire Transmedia Cloud was posted on the wall. 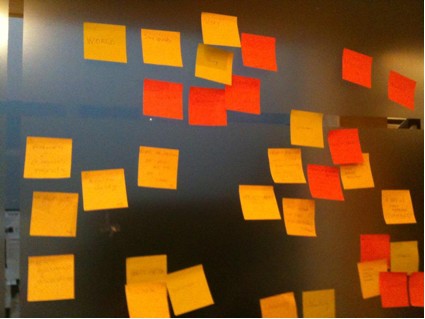 (Note: colours of the post-its are not supposed to have meaning.) 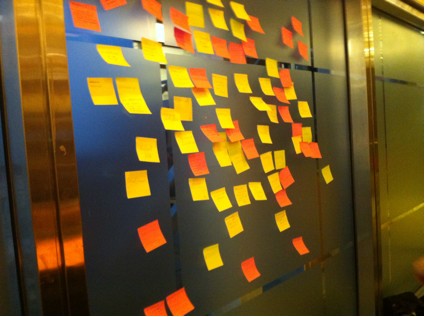 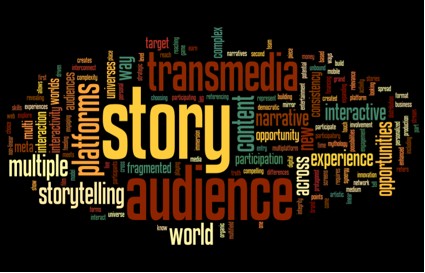 (Note: This is a computer generated cloud we did back home, including all the ideas from the sticky notes).

1.3.- BRINGING TRANSMEDIA DOWN TO EARTH
The next step was to discuss (in smaller groups) the main concepts we had jotted down. The discussion resulted in three lines of thought:
– Business / Distribution / Branding / Financing Models
– Storytelling / Story Worlds
– Interactivity / Participation
There was no intent to resolve or limit the question about what Transmedia is, but to assure that the working session progressed and that we were standing on common ground.

We had some time (about 15 min.) to talk about those concepts and, after that, a spokesperson for each group would present their key findings to the whole group.
If anyone thought that they had missed an idea, he/she would include it then.
And that’s what we did.

1.3.1.- BUSINESS
We intended to find a unifying way, some business models that show clearly how they work and how investors can take profit of Transmedia.

Broadcasters ought to be main partners in financing Transmedia projects (at least those of them that include Visual Media).

Social Media have to be understood as natural players.

On one hand, we are part of the European Union, on the other, we each have our own local reality. Therefore, funds ought to come from both the EU and the local governments, depending on the characteristics and reach of each project.

In order for private investors and brands to see Transmedia projects as an opportunity, they need to be involved in the process.

1.3.2.- STORYWORLDS
There is a complex dramaturgy and narrative in Transmedia: there are many kinds of Worlds, both open and closed, and they can be complementary.

Again, Social Media can’t be ignored, neither can the communities generated around Transmedia Narratives. Their construction and the dialogue they provoke are part of the story.

In short: we need tools to establish connection and immersive dialogues.

Transmedia Stories imply immersion, engagement, multiple perspectives and the idea that, some of them, work as a playground and/or a work in progress.
The users/players, by using and playing, create meaning.

1.3.3.- INTERACTIVITY
There is a wide spectrum in Transmedia: any project has its own grade of interactivity (watchers, users, prosumers, co-creators).

One more time, there are the Social Media.

We have to reward our fans/participants, giving them something their peers don’t receive (personalised experiences).

Authors’ Know How ought to be opened up and, although some limits have to be established, there is no more absolute control of the narrative: user generated content is here to stay. Some kind of sharing, then, is natural to Transmedia.
Authorship doesn’t mean ownership, and these are concepts that have to be rethought.
Obviously, this implies some risks (either legal, financial, or both), but we can see them as an opportunity.

1.4.- SWOT ANALYSIS
As much as we wanted to keep talking about all this, it was time to go ahead.
Our hosts asked us to make new groups and perform a SWOT (Strengths, Opportunities, Weaknesses, Threats) analysis on some important matters related to Transmedia:
– Content
– Financing
– Clustering / Networking

On this occasion we would have some more time (approximately 30 min.) Below are the contributions on each subject. 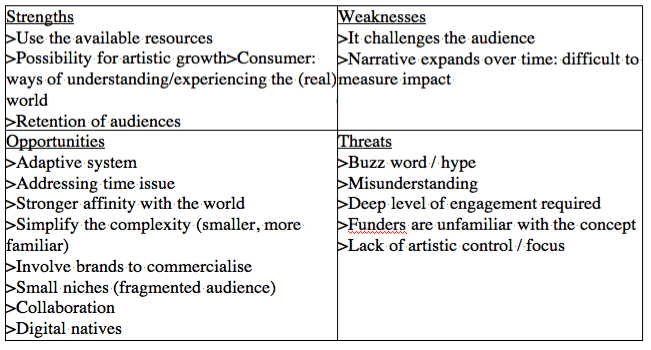 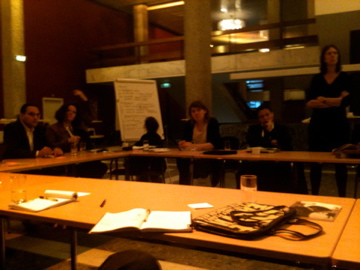 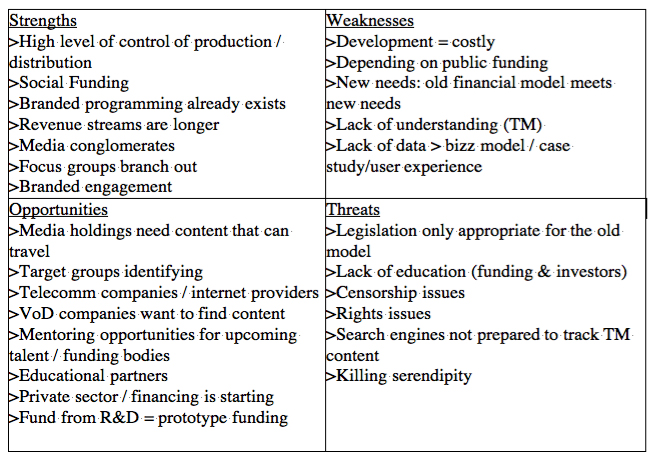 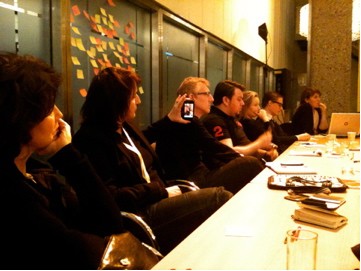 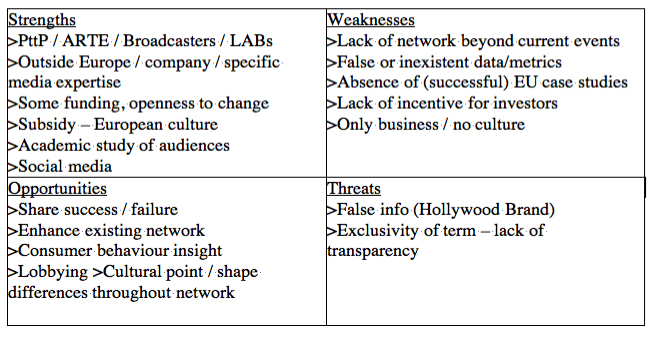 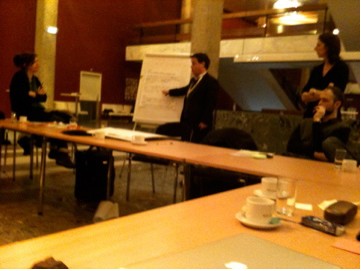 Do. Share. Go global without losing our idiosyncrasy. This is something that we believe in.
One step at a time. We recognise that building a European Network would help all the people that are involved in the Transmedia Theatre. In other words, all of us, because everybody is already in the play.
We have to continue our voyage, but it seems reasonable to say that Transmedia Europe Network is on its way.

The meeting started at sharp 10:30 AM, and it ended at 1:30 PM. The general spirit was high, and everyone would have gone for more.
And we had more one hour later, after lunch. That doesn’t mean that while we ate we stopped talking about what had brought us here: Transmedia was the word.

2.- AFTERNOON SESSION
14:30. As it is said; the show must go on. It was time to go public and share all we had been talking about in the morning session (and more) with the CineMart guests and Rotterdam Lab producers in an open session.

Dominique Van Ratingen welcomed the people that had come to the van Capellenzaal, in the ground floor of de Doelen and introduced Alok Nandi, who would act as a moderator and introduce the guest speakers.

2.1.- MORNING SUMMARY
Alok Nandi started his speech asking the people whether they knew Kurosawa, and how as a child, he would go the cinema very often. Then Alok explained that the famous director ‘s eldest brother had worked as a benshi, a storyteller that narrated the movie to the public in the silent film era. Some years later, the cinema changed and became talkie.
So, Alok went on, it seems that we are facing a few more changes. 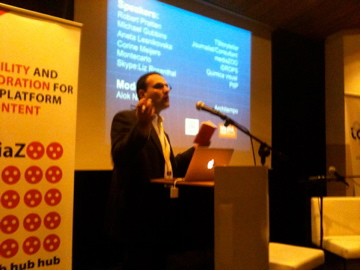 He referred to the idea of Pecha Kucha, “chit chat” in Japanese, to introduce a staged dialogue with Juliane Schulze to summarise the findings of our morning session.

Next, he introduced the panelists, being the first one Robert Pratten.

2.2.- TRANSMEDIA FOR FILMMAKERS
Robert’s keynote was about the reasons why filmmakers ought to explore Transmedia Storytelling.
His main point was that Transmedia is not the “enemy” to independent filmmakers. Far from that, an intelligent use of the tools that the digital era has brought can help filmmakers in many ways (getting funded, improving their career and exploring their creativity).
The final point of Robert Pratten’s intervention was dedicated to the need to find, understand, and engage audiences.
Here you have a link to his blog post where he talks about the same subject. The post includes Robert’s SlideShare. 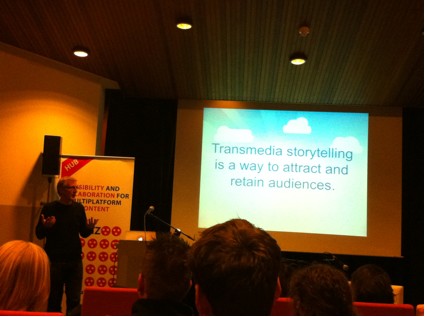 2.3.- THREATS
Next panelist was Michael Gubbins, who shares the idea that media are changing already, although his approach to Transmedia is critical; he doesn’t take anything for granted.
This position allows him to dispassionately analyse the evolution of cross-transmedia in other sectors, mainly sports. In doing so, we can learn a lot about this kind of projects and how transmedia methods have grown and have been assimilated into the mainstream.
The question Michael raised is: Does transmedia have the potential to become a truly new form and, if so, what are the next stages of its development?
To conclude, he asked himself how we could reach an audience that is scattered all over the world (and sometimes over time, as well). Then, he mentioned the need for reliable social technographics. 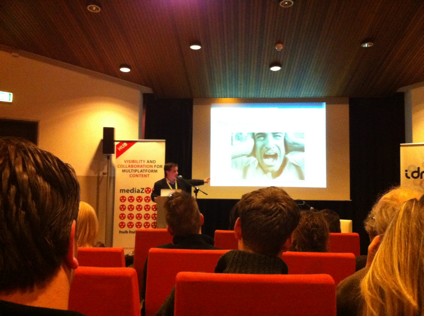 2.4.- MEDIAZOO
After Michael Gubbins’ reflections, it was time to introduce two new initiatives.
Aneta Lesnikovska showed us mediaZoo, a place dedicated to offering visibility to multiplatform projects and share information about funding and workshops.
In her own words:
“mediaZoo transmedia hub is an online platform for organisations and individuals who are actively involved or have a shared interest in transmedia. We offer a platform to inform, promote and exchange ideas and experiences in the field of transmedia; present and promote projects, and give an overview of workshops, funding possibilities and financing models.
The aim is to create visibility and transparency in the multiplatform content production and management; curate and promote innovative content and initiatives; stimulate exchange of knowledge and new financing models.” 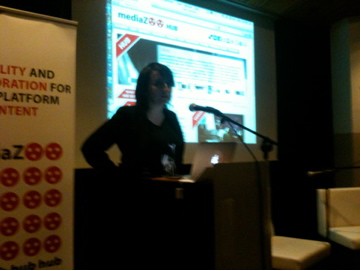 2.5.- IDROPS LABS
The following speaker was Corine Meijers who presented iDROPS. They have gone public after a first year of beta-testing (an experience with great results). They offer labs and workshops. In her own words: “iDROPS intends to supply answers by means of internationally oriented innovative labs at which the crossover potential within and beyond the creative industries will be explored by integrating digital tools into the creation and production process. Moreover iDROPS wants to explore the creative and commercial impact of newly developed content and services. iDROPS’s target group will be professionals in various creative industries as well as other areas, such as science, trade, education and, above all, health and social sector.” 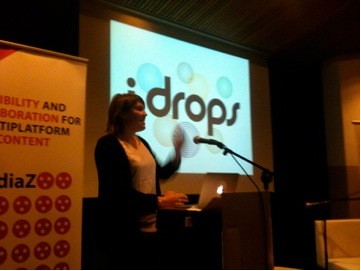 2.6.- LIVING IN TRANSMEDIA
Next came a dialogue between Alok Nandi and Montecarlo, whose professional life has evolved from comic-books, through film to Transmedia.
Their conversation can be summarised like this: We need stories because storytelling reflects & helps us understand the world we live in. We haven’t understood yet that it is actually a digital-wireless environment.
We live in complex systems that, in a way, are already Transmedia: we experience systems and stories as a work in progress (In a system, there are functions and relationships. There is flux).
This may be a hard idea for the general public, but it seems like a useful one to those of us that are already working in transmedia projects.

2.7.- SKYPING WITH POWER TO THE PIXEL
Then came yet another dialogue, this time a Skype conversation between Dominique Van Ratingen and Liz Rosenthal, founder of Power to the Pixel.
Liz talked about PttP and the importance of sharing good experiences.
She also referred to their website where they have recently exposed several case studies.
Another point was the importance of education for transmedia professionals, and for funders, to really understand transmedia. (There is no available vocabulary, no business model.)
Their last point was this: Research is important; we have to resolve the problems the right way. 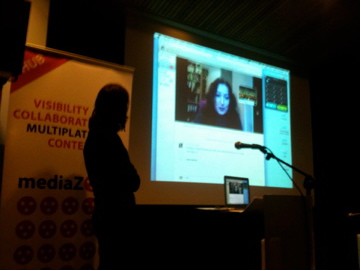 2.8.- ANY QUESTION?
Alok Nandi wrapped up the session with a brief summary of the needs we have and how to fulfill them. Content creators in Europe need to share and learn from their mistakes (not only the success stories) in Transmedia. They also need transmedia tools and learnings (both from major transmedia universes, and from transmedia experiences on a minor scale, that they can relate to).
Setting up TEN, Transmedia Europe Network, is a way to continue knowledge exchange, the organisation of activities and information collection.

Before closing the afternoon session there was time for the audience to ask questions and to go a bit deeper into the ideas exposed by the panelists.

This is not only the end of this meeting, but the beginning of something more.